From sound survey to sample-set

Among the various forms of documentation of a pipe organ, particularly significant in the case of ancient instruments, there is the so-called "sound survey". It is a documentation of the instrument's sound, conceptually similar to photographic documentation (for an in-depth discussion read this page, in which the aims of producing virtual replicas of existing organs are also mentioned; we also recommend consulting here for further information on how to interpret a spectrogram), which allows you to perform qualitative and quantitative analyzes by suitably processing the recorded audio tracks.

This video shows an example of sound analysis following a survey (Manzoni 1886 organ in Rigosa, Bergamo, Principale 8 stop; the survey was performed at the same time as a visit carried out in July 2011, of which the technical report, at the bottom of which is the actual sound analysis, is freely downloadable).
Even a superficial glance allows us to appreciate the informative scope of this kind of documentation, based on the so-called "sampling". Listening to the sound of each pipe corresponds to the possibility of seeing "live" the behavior of the individual harmonics and the identification of other information is immediate, such as air leaks from wind chests and transounds; not to mention that registration allows permanent archiving of all information, which remains available for further analysis.

By "sampling" we mean, as clearly shown in the video, the high fidelity recording of each note of each stop; usually we proceed so that each register corresponds to a single audio file.

The production of an interactive virtual replica that can be played by connecting a keyboard to the computer via MIDI, can be considered the evolution of this type of sound documentation.

For this purpose, each sound is recorded for a much longer time than that necessary for the sound survey - on average several seconds per note, including all the reverberation time; all mechanical noises are also recorded and finally a complete photographic documentation is carried out, which will be used to define the graphic interface of the virtual replica.
Some processing steps are then performed - mainly subtraction of the background noise and subdivision of the audio file into as many sections corresponding to each single note, to which cycles ("loops") are then applied to ensure the continuity of the sound kept even with short samples - and the elaboration of the photographic material in view of the preparation of the actual sample-set. The set of samples and images, combined with a code file that appropriately instructs the platform in which everything will be loaded, is called "sample-set".

The result will be more faithful the better the quality of the recording, until it is almost indistinguishable from a record made with the original instrument; in addition to the audio reproduction, the sample-set has a graphic interface that reproduces just as faithfully the console with keyboards, pedal board and all the controls it is equipped with - also allowing its animation.

A complete interactive documentation of the virtualized instrument - the "sample-set" - is thus produced: the reproduction software has reached levels of considerable refinement that allow, in the case of Hauptwerk, to model characteristics of the organ system such as the bellows with relative graphic interface and effects on the sound of the samples and with a good approximation of the original.

The concept behind the production of the sample sets for Hauptwerk proposed in these pages is above all that of the technical-sound documentation of particular and little-known instruments: the Italian organ building, especially in historical instruments, has - despite the usually small size - legendary sounds with a crystalline and very personal rendering both in the individual stops and in the amalgams and with balances often of rare beauty that make them very enjoyable.

However, up to the threshold of the twentieth century, the ancient Italian organ is also, usually, heavily limited by technical resources - real keyboard and pedalboard extensions, "short" first octaves, single manual, divided registers - in fact prevent any kind of study that fall outside the Italian Renaissance repertoire or from that of an opera imitation of the nineteenth century.

The production of sample sets allows within reasonable limits to partially overcome these constraints, proposing - alongside a faithful copy of the original - extended versions in which the extensions of keyboards and pedals are brought to a standard useful for study or musical performance.
Also in the stops disposition, completions and additions are normally proposed which, while respecting the original material, greatly amplify the performance possibilities.

naturalness in response and phrasing control 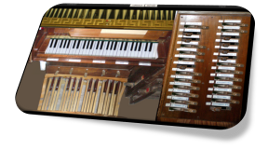 A precise aesthetic choice led - after various tests - to deliberately renounce sophisticated surround audio techniques, rather seeking absolute naturalness in sound rendering and above all pursuing the aim of giving the musician the opportunity to study articulation and phrasing in the most reliable and precise way. 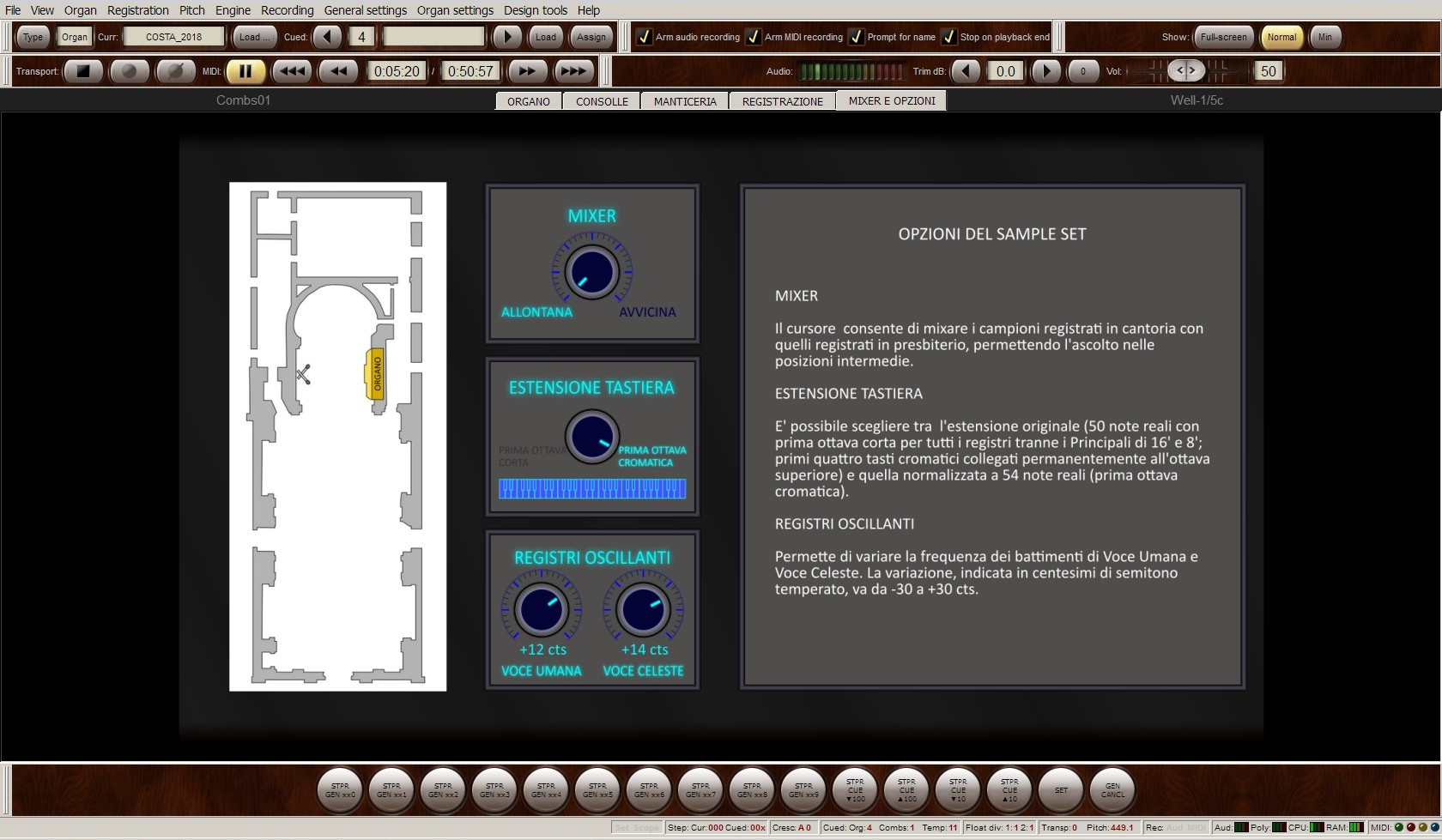 Therefore in each set the user is normally given the possibility to freely change the proportion between direct and reverberated sound: you can virtually move closer or further away from the pipeworks until you find the best and most useful balance for study, performance or audio recording. It is possible to study and play with the precision of direct sound and then re-play via MIDI and listen again or record realizing the performance of the phrasing in the environmental acoustics.

This philosophy also has the advantage of producing sample sets with a relatively limited consumption of RAM memory compared to a very high sound quality.

The sample-set and the promotion of the original instrument

The entire sample-set production project is conceived primarily in terms of the enhancement and disclosure of our Italian organs, also and especially abroad.
The ancient Italian organ is not well known beyond national borders, particularly in Central Europe: the publication of the first sample-sets has shown how, despite their usually small size, the splendid sounds of our instruments can be a stimulus and inspiration for foreign organists both as regards their own repertoire and for improvisation (here audio recorded with the Costa Serina sample set can be listened to).
A further aspect concerning the enhancement of our organ heritage is the possibility - to the extent that a future development of the project will make it realistically feasible - of allocating to the owner of the original instrument (parish or diocese) a share of the proceeds from any sale of the relative sample-set: if at the moment this prospect still seems relatively distant due to the intricate Italian tax legislation and above all the mistrust that is sometimes encountered on the part of parishes and diocesan Curias, nevertheless it is our intention to work to implement it as soon as possible.

We are in fact firmly convinced that virtual replication can be an effective means for the enhancement of our Italian organs: we hope that from a cultural point of view we can soon arrive, especially on the part of the owners and managers of the instruments, to an open mind that can make them recognize their real potential.