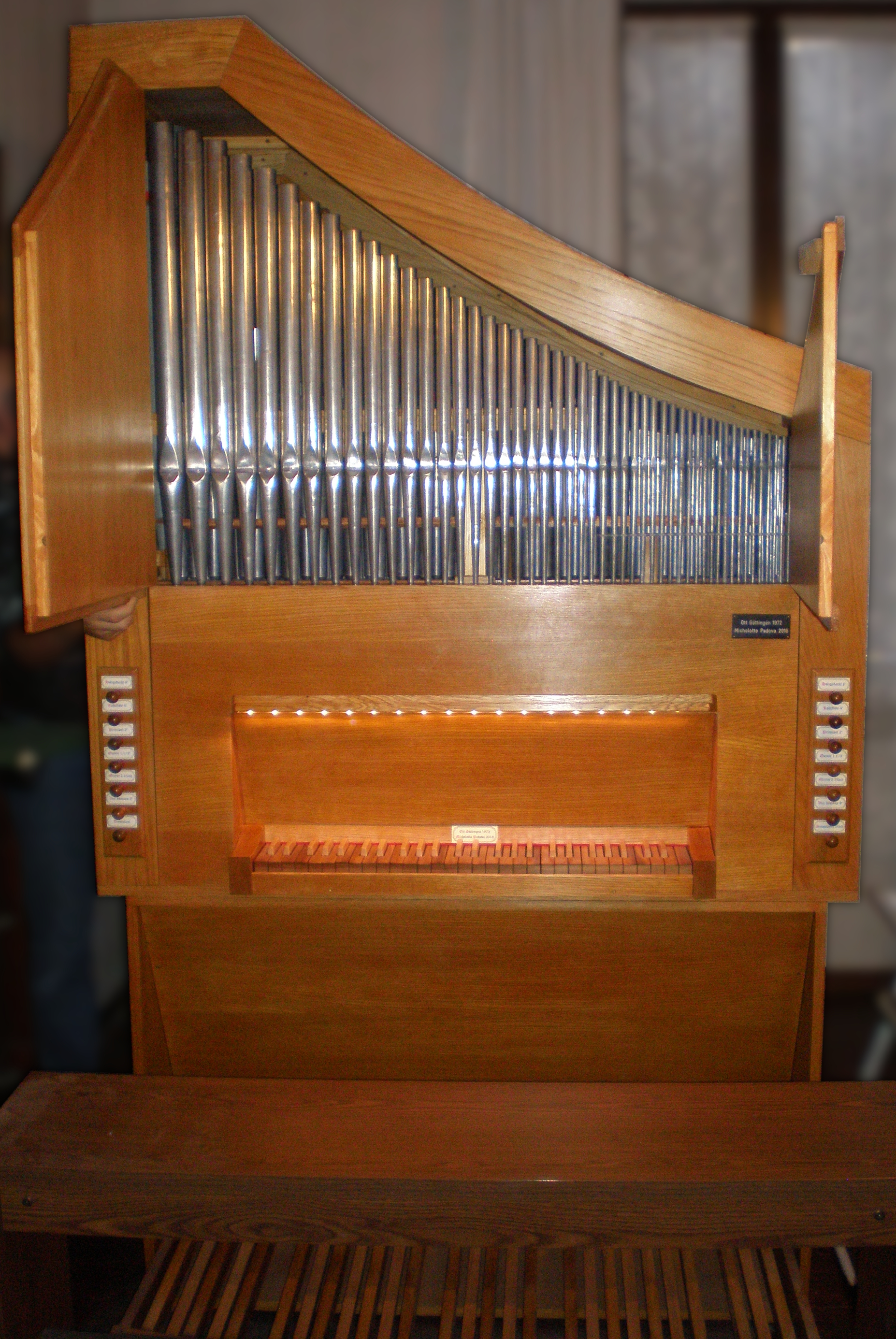 With this release we present a small positive organ built in 1972 by Paul Ott of Göttingen for the Evangelical Church of Kirchhain - as reported on a handwritten cartouche inside the secret of the wind chest.

The organ, of very modest dimensions, was dismantled and sold in recent years, giving way to a larger instrument.
In 2017 it was bought by the current owner, M° Gabriele Giunchi, and placed in his private home in Bologna.
In 2018 the organ builder Daniele Michelotto from Albignasego (Padua) oversaw the restoration and expansion, installing the 8 ft Vox Humana stop (on the slide prepared by Ott in the wind chest but left vacant) and the 27-key pedal board (without own pipes, hard-coupled to the keyboard).

It is an organ of very small dimensions but with a particularly rich stop list, which allows you to deal with a rather vast repertoire for an instrument of this kind; the intonation is perfectly balanced, fresh and light and is very closely reminiscent of a classic Trühenorgel - which makes the Ott positive perfectly suited to continuo.

And it is precisely in this perspective that we propose it: as a small instrument for the continuo and for the vast harpsichord-organ repertoire that finds in the lightness, variety and balance of its sounds a very effective means of expression.

Single manual of 54 keys with bass / discant division at C3; straight pedal board with 27 pedals, without own stops and hard-coupled to the keyboard. 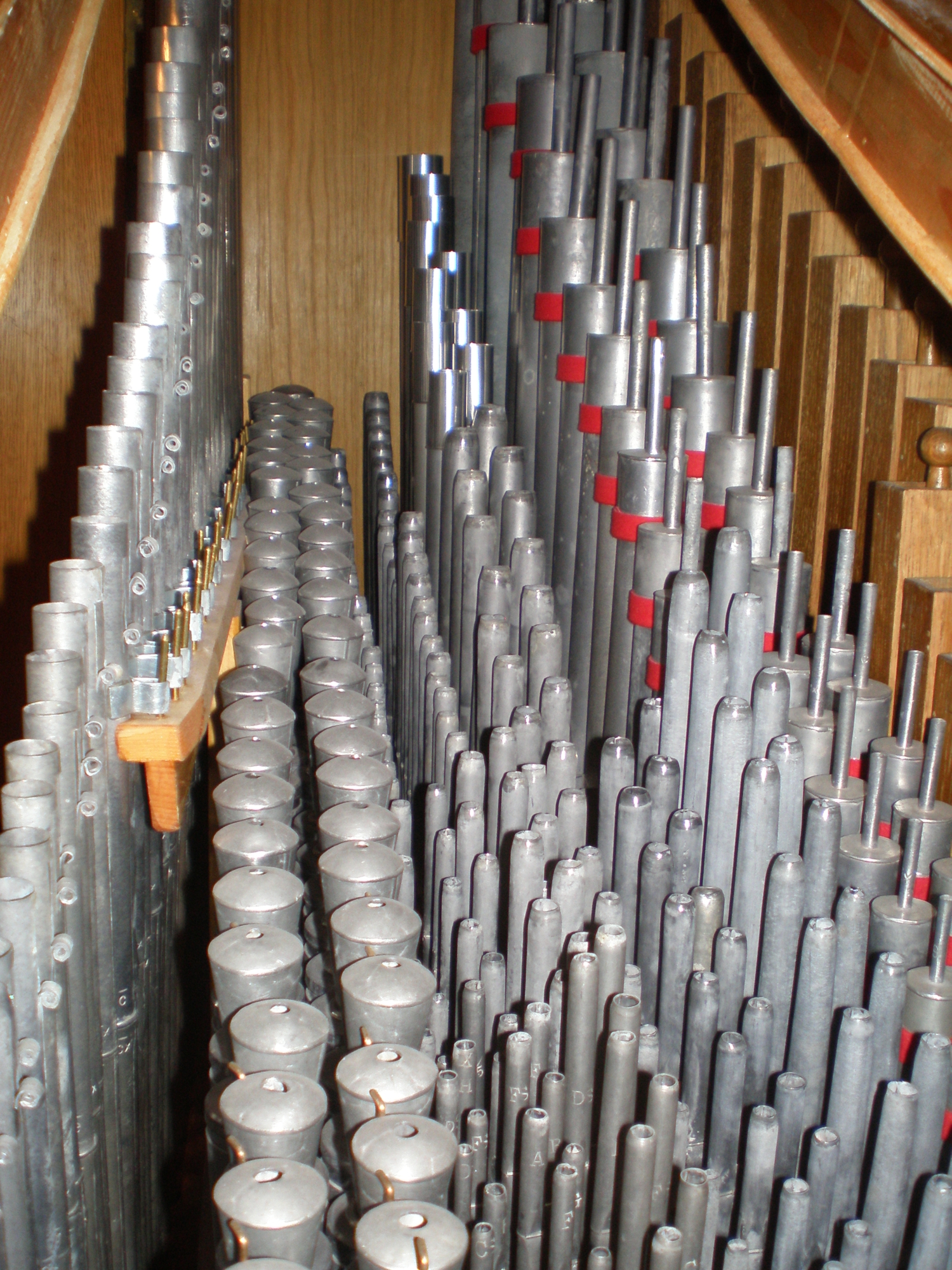 On the façade is the Prinzipal 2', placed for its entire extension on a rack specially installed by Michelotto in place of a pre-existing support much less effective from an aesthetic point of view.
Immediately behind the façade are the pipes of the Vox Humana. As already mentioned, Paul Ott did not insert it in 1972 but prepared a free slide on the wind chest: in 2018 Daniele Michelotto installed a beautiful stop made by Walcker in 1972, which fits perfectly into the original pipe work, completing it.
The Holzgedackt is built entirely of wood, with magnificent intonation pipes placed at the bottom of the case.
The Rohrflöte 4', entirely in tin-lead alloy, is chimney-stopped while the pipes of the Sesquialtera are conical of medium size.

The organ-case is equipped with front protection doors that can also be closed to muffle the sound.

The sampling of the Ott-Michelotto organ was performed in a single session in October 2019. The microphone station - with NOS stereophonic technique - is frontal and it was not necessary to acquire multiple releases given the very low reverberation time of the small room in which the instrument is placed.

Recording was done at 96kHz and 24-bit, reduced to 48kHz when processing was complete.
In addition to the sound of the blower, all the mechanical noises of the keyboard, pedal board and stop knobs were sampled. 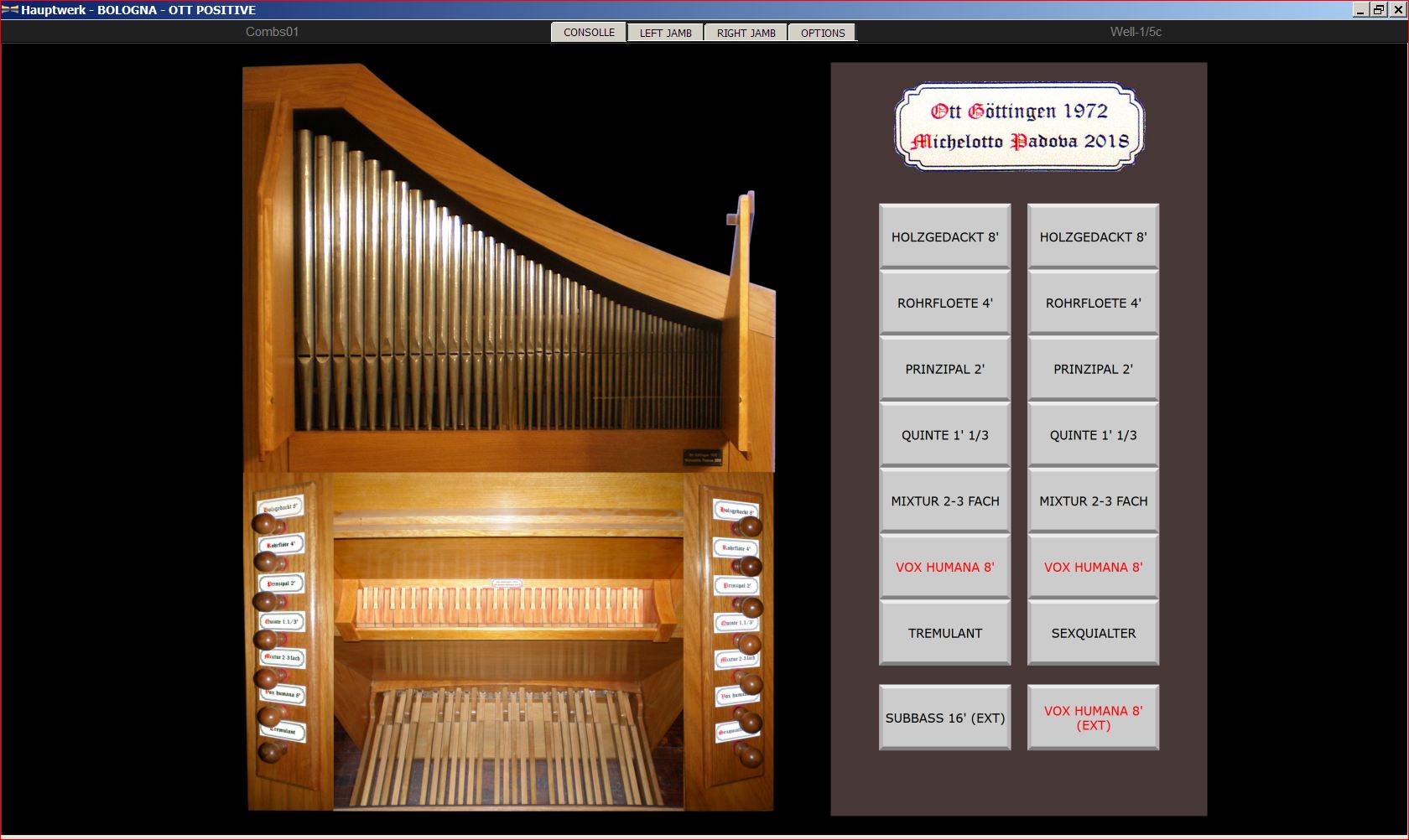 The main screen reproduces the entire instrument, from the façade to the console. The keyboard and pedal are designed for assigning MIDI commands, while the recording knobs are operated by more readable commands.
The pedal board is hard-coupled to the manual, as in the original; to expand the possibilities of use of the organ, two registers have been implemented, Subbasso 16' (real, using the samples of the Pinchi positive) and Vox Humana 8' (borrowed by the manual). 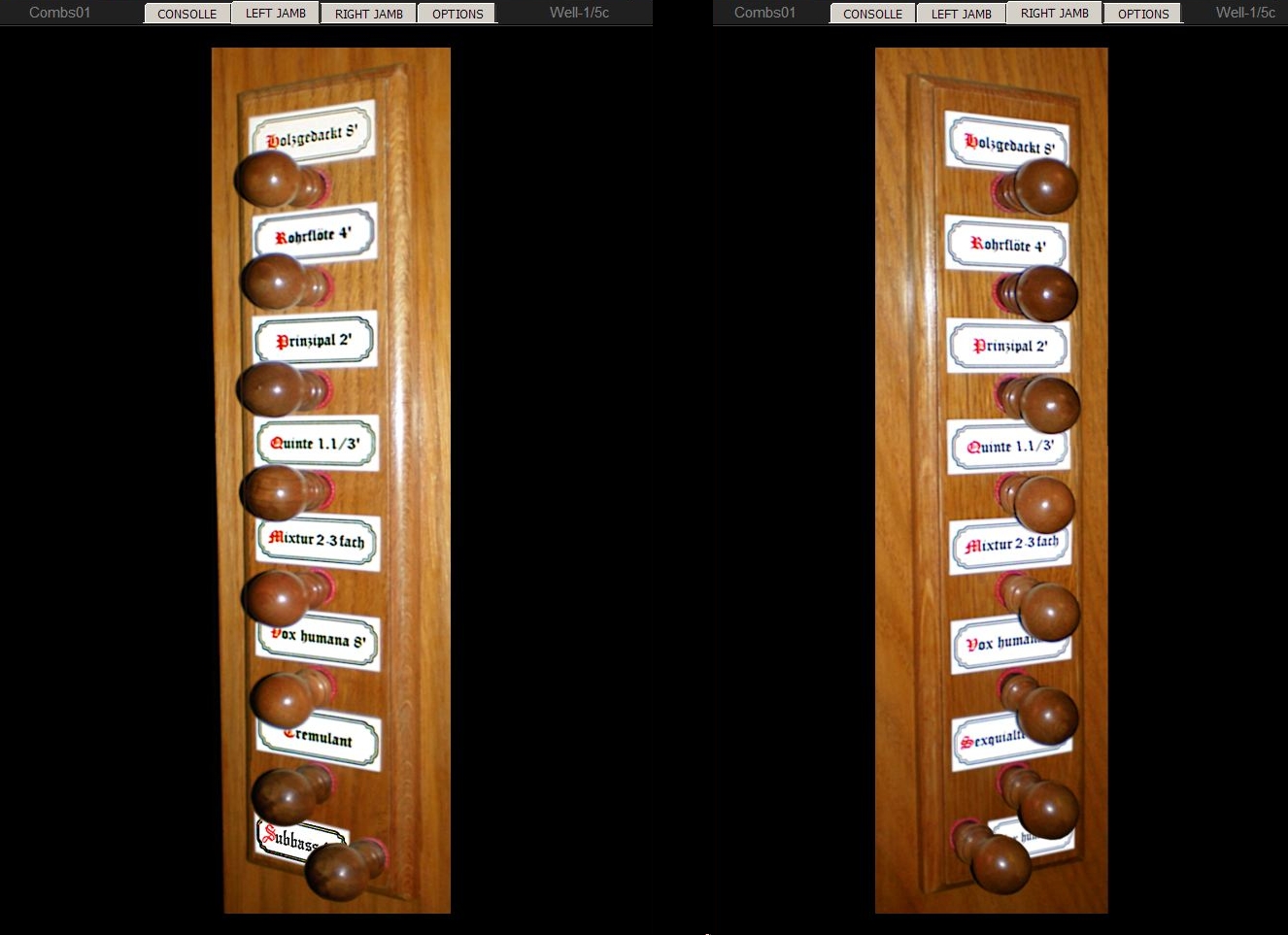 Two screens have been set up for viewing the two columns of knobs on independent monitors; on the bottom of each column an additional knob has been inserted for the two stops added to the pedal board. 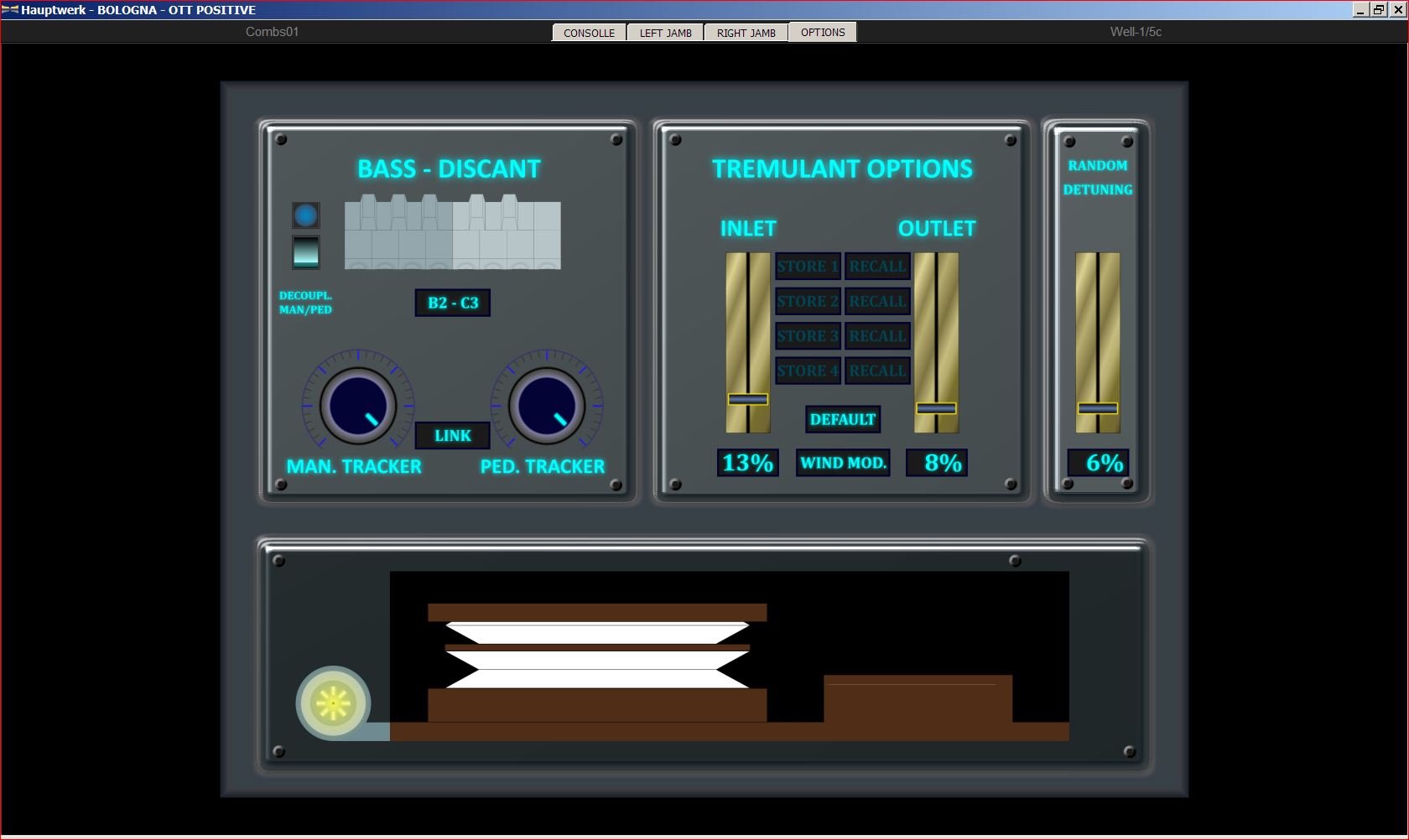 The options screen is particularly rich in features that it seemed useful to implement to make such a small sample set more interesting and flexible.
The screen is divided into four sections, corresponding to four different groups of features. 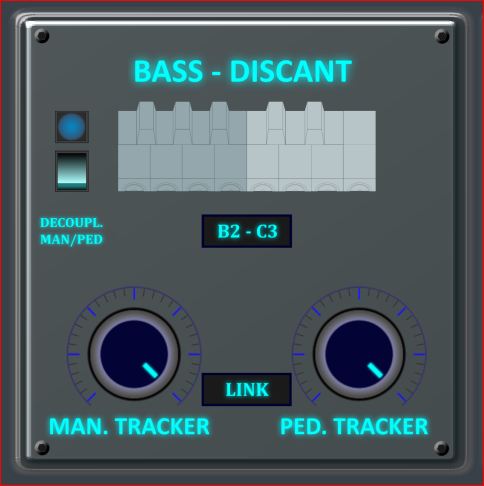 The upper left panel presents the command for the variation of the bass/discant split point and the knobs to control the volume of mechanical noises of keyboard and pedal board.
To modify the bass/discant division, simply click on the first button of the discant section to be set: the default setting is C3 (split B2/C3) as in the original and the division point can be moved between A2/Bb2 and D3/D#3.
There are two knobs for adjusting the mechanical noises of the keyboard and pedal board (including the Tremolo noise in the latter); the LINK button, active by default, allows you to link or unlink them from each other. The positions set remain memorized at subsequent starts of the sample set.
To the left of the control for the bass/discant division a switch has been set up which allows, if desired, to de-couple the pedal from the manual: in this way it becomes possible - where the extension allows it - the performance of repertoire in trio. 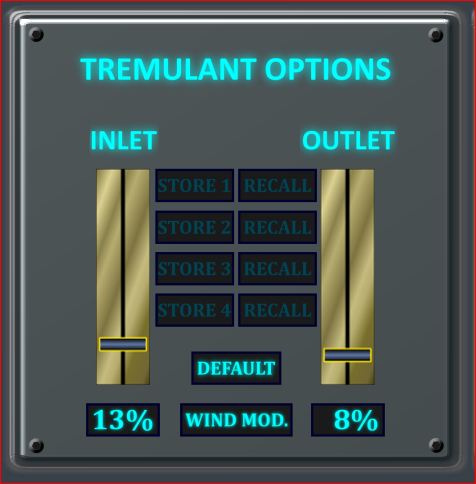 For the first time in our publications the Tremolo based on the wind model has been implemented: the panel in the top center allows the user to adjust its settings, varying frequency and depth.
The Tremolo model is of the "lost wind" type: the left cursor adjusts the amount of air in entrance when the register is activated, while the right cursor adjusts the quantity of air outgoing from the Tremolo valve itself. Two indicator lights display the opening percentage of the relative valves, on which the amplitude and frequency of the oscillations depend (for a further description of the interaction between the two cursors, see the explanatory video in the MEDIA section); the values attributed to the cursors by the user remain memorized upon subsequent loading of the sample set.
The DEFAULT button restores the values to the default setting, corresponding to the original Tremolo effect of the Ott organ; four programmable memories are available to recall as many combinations of your choice, which can be defined by the user (once the cursors have been brought to the desired level, press the STORE button relating to the memory to be fixed; to recall settings press the corresponding RECALL button) .
For those who do not have the advanced version of Hauptwerk, without a wind model, the traditional Tremolo has also been implemented and can be selected using the WIND MOD./HW MOD. switch

A function has been implemented in this sample set that simulates the slight tuning imperfection characteristic of each pipe organ.
The cursor drives a random detuning applied to each single sample allowing you to vary the effect from 0% (perfect tuning) to 100% (evident detuning); for each intermediate value a more or less marked deviation effect is obtained, which makes the amalgamation of sounds more realistic.

The lower section of the screen is dedicated to the bellows: blower, reserve bellows and Tremolo bellows are modeled. The blower can be turned off by clicking on the stylized image of the electric fan, to the left of the reserve bellows.


Demonstration of the random detuning functionality:


Request the demo of the sample-set

The demo version of the sample set for Hauptwerk 4.21 and later (up to the most recent version 6) is fully functional, but the sound is disabled periodically; to download it, send a request by email via the button below.

Warning: do not change the subject of the message! The correct sending of the response containing the link to the sample-set depends on it.

If the sample set is satisfactory, the full version may be requested after the trial period (see the instructions in the email containing the link to the demo).