The organ of the Malpaga church is a small instrument corresponding to the so-called "Cecilian" style, as it was defined - with a certain arrogance dictated by an ideological approach that lasted from the 60s to the 90s of the twentieth century that a priori denied its value - the tendency of the Italian organ-building to emancipate itself from the nineteenth-century taste dominated by the imitation of the opera.

A trend that followed the realization, by the most skilled musicians of the last quarter of the nineteenth century, of the enormous distance between nineteenth-century Italian organ music - precisely flattened on an opera imitation often of a very low level and which did not even arise the problem of the possibility of a more advanced and mature technique - and the oldest Italian one but above all the Central European one, from Bach and his predecessors to French Romanticism up to German Expressionism.

The Marzoli & Rossi company, active in Varese (northern Lombardy) in the first quarter of the twentieth century, was among the first to propose a type of organ that - without renouncing mechanical transmission and the so-called "a vento" wind-chest (the italian "a vento" wind chest is equipped with small valves under each pipe instead of the sliding slats of the slide wind chest) so dear to the Italian tradition and partly maintaining its character intonation - exceeded the limits of instruments built up to then by equipping them with extended pedalboards, complete first octaves and stops finally no longer limited to bass or discant only; intonation was also brought closer to the taste inaugurated a few decades earlier in France by Aristide Cavaillé-Coll, without renouncing - as already said - the lightness of the Italian style.

The organ built in 1908 for the Malpaga church shows, alongside the use of a very traditional italian "a vento" wind-chest, a perfect mastery of mechanical design up to the installation of the Barker lever for the first octave of the manual, passing through a particular system for the movement of the stop knobs - which are activated when the combination pedal is pressed without however canceling the registration entered manually.
The build quality is top notch both in the joinery and in the construction of the wooden and metal rods: there is a meticulous attention to detail unknown to Serassi themselves, who were satisfied with perfect efficiency without worrying excessively about the finishes.

As proof of the validity of this style and of the way in which it was interpreted by these particular organ builders, we note that, despite its limited size, the Malpaga organ was defined by a French concert player "a pétit Cavaillé-Coll" due to the similarity of the sound resources and for constructive care, not the least reason for its perfect condition of efficiency more than a century after construction.

Organ built in 1908 by Marzoli & Rossi from Varese. Single manual of 58 keys C1-La5 for 58 real notes. Straight pedalboard of 27 keys for 27 real notes. Knob stops in a single horizontal row on the front of the keyboard. Stop list:

Principale 16' C1-Eb2 pipes are borrowed from Contrabasso 16, whose connection to the manual take advantage of a Barker machine to lighten the transmission.
Six brass foot-levers on the front of the pedalboard for Manual-Pedal union, Tromba 8, Concerto Viole (inserts Principal 16 from E2, Gamba 8 and Voce Celeste 8), Mezzoforte (Principals 16, 8, 4, Flutes 8 and 4, Gamba 8 ), Ripieno and Tutti.

Currently the organ is playable, used in liturgy and occasionally for concerts; it is presented in good conditions of efficiency, intonation and tuning.

The sampling was carried out in a single session in October 2012 using a microphone station in the organ balcony (NOS configuration at the height of the façade pipes and about 1,5 meters away). The sound pick-up in the organ balcony guarantees freshness, attack precision and an excellent stereophonic image of the pipes body, resulting on the other hand almost completely dry and free from ambient acoustics.

The recording was made at 96 kHz and 24 bits, reduced to 48 kHz after processing.
In addition to the noise of the bellows and wind, all the mechanical noises of keyboards, pedals and stops were sampled.

In 2020 the acoustics of the Malpaga church was rebuilt using the plugin Impulse Modeler (Voxengo) in synergy with an appropriate treatment of the original samples aimed at obtaining the correct stereophonic image as well as audible at a greater distance: the initial concerns about proposing samples with digitally reconstructed reverb fell immediately after the first tests, the results of which proved to be almost indistinguishable from recordings made in the church in 2012 at the same time as the sampling.

The sample set is then presented in four-channel format and, similarly to the Costa Serina, it will be possible to virtually move from the position in the choir to that in the nave.

Please note: as in the case of Costa Serina, also in this publication the presence of two stereophonic perspectives is conceived as a function of the variation of the instrument's listening position. For this reason the volume of the two series of samples does not have independent adjustments: for the best performance we recommend using a simple stereo configuration rather than a multichannel one, or even listening with headphones.

As usual we propose, alongside the faithful reproduction of the original instrument, an extended version which in this case includes a second expressive manual, greatly expanding the musical possibilities.

The set can be loaded in three distinct ways:

- "near" version by enabling, in the loading screen in Hauptwerk, only the ranks with the word "near" (samples without ambient reverberation);

- "far" version, including multiple releases, enabling only the "far" ranks;

The graphical interface is made up of of five tabs. The facade of the Malpaga organ with the balcony is reproduced. The console of 1908 is reproduced as faithfully as possible; the behavior of the keyboard, pedal board and stops has been modeled with the utmost care, in line with the philosophy of the project based on documentary as well as musical instances.

Each command on the screen exactly reproduces the behavior of the original console; the keyboard and pedal board can be driven directly via MIDI while the stops commands and the combination pedals, very small in the photographic representation, are controlled by a more readable graphics.

On the front of the pedal set there are five brass combination pedals for:

- Ripieno. The "Ripieno 4 file" (4 ranks Mixture) does not have a knob control on the console but is only called up by the combination pedal, together with all the Principals stops; therefore it cannot be operated independently.

- Forte (all stops except Unda Maris 8p and Celeste 8p) 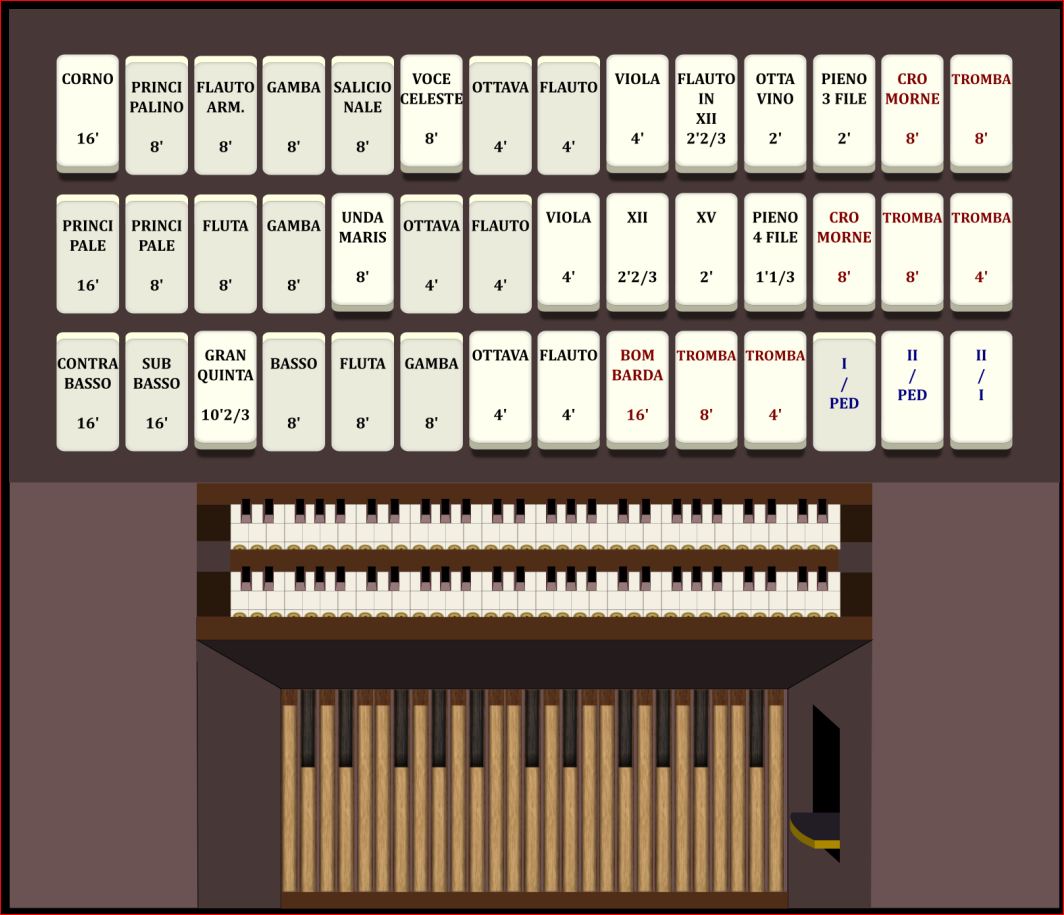 The small size of the Malpaga organ and above all the big limit of having a single keyboard while having a purely romantic sound have made us think of the possibility of a rather large extension. The set has been equipped with a second expressive manual, entirely based on the original samples, and with a consistent extension to the pedalboard obtained through a careful use of stops borrowed from the Great Organ; the only non-original samples are those of the first octave of the Bombarda 16p (to which the same reverb used for the entire sample set has been applied).
Below is the diagram of the stops for transmission to the pedalboard and to the Swell:

The graphic interface has been deliberately simplified according to its legibility: the register commands are of the plate type and the expression is controlled by the pedal to the right of the pedalboard.


FOR A CORRECT USE OF THE MASTER COUPLERS PANEL IN HAUPTWERK

The simultaneous reproduction of two independent consoles forced to assign to each different codes for the MIDI input / output channels and above all for the couplers, which must be taken into account in order not to be disoriented by an apparently anomalous operation of the Master Couplers panel in Hauptwerk.
Here are the related codes: 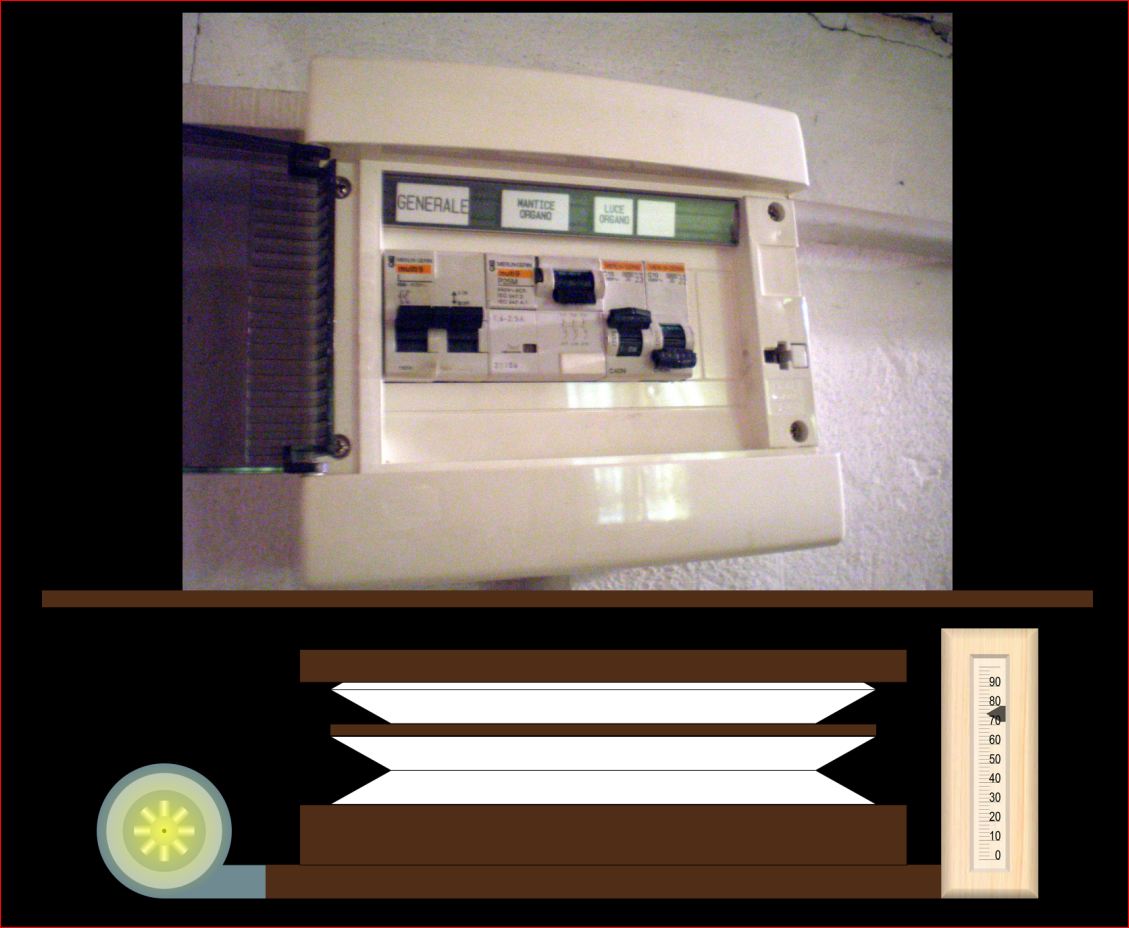 The original instrument is equipped with a single large bellows: its behavior has been faithfully reproduced and made visible in this screen which reproduces the start switch in the console, a stylized view of the bellows and the electric blower (which acts as power light ) and a pressure indicator.
When the set is loaded, the engine starts automatically and the bellows themselves fill up while the indicator displays the air pressure value for the largest windchest: you can turn off the engine by clicking on the switch image (and continue playing with the residual air until at full exhaustion). The Mixer and Options page contains the Mixer knob that allows you to mix near or distant samples, changing the listening position.
The position of the microphone station is indicated in a stylized plan of the Malpaga church used for the production of the impulse response.
In the "Near" position the volume of the direct samples is largely preponderant with respect to the distant ones: the result is an almost dry version, suitable for use with convolution reverb in HW5.

The mechanical noises - keyboards, pedalboard, stops and motor - have only the direct version and can be disabled using the "TRACKER ACTION" button.

The sample set for Hauptwerk 4.21 can be downloaded for free via a link with an access key. To get it, send a email-request via the button below.